Brexit and Nationality: a case study 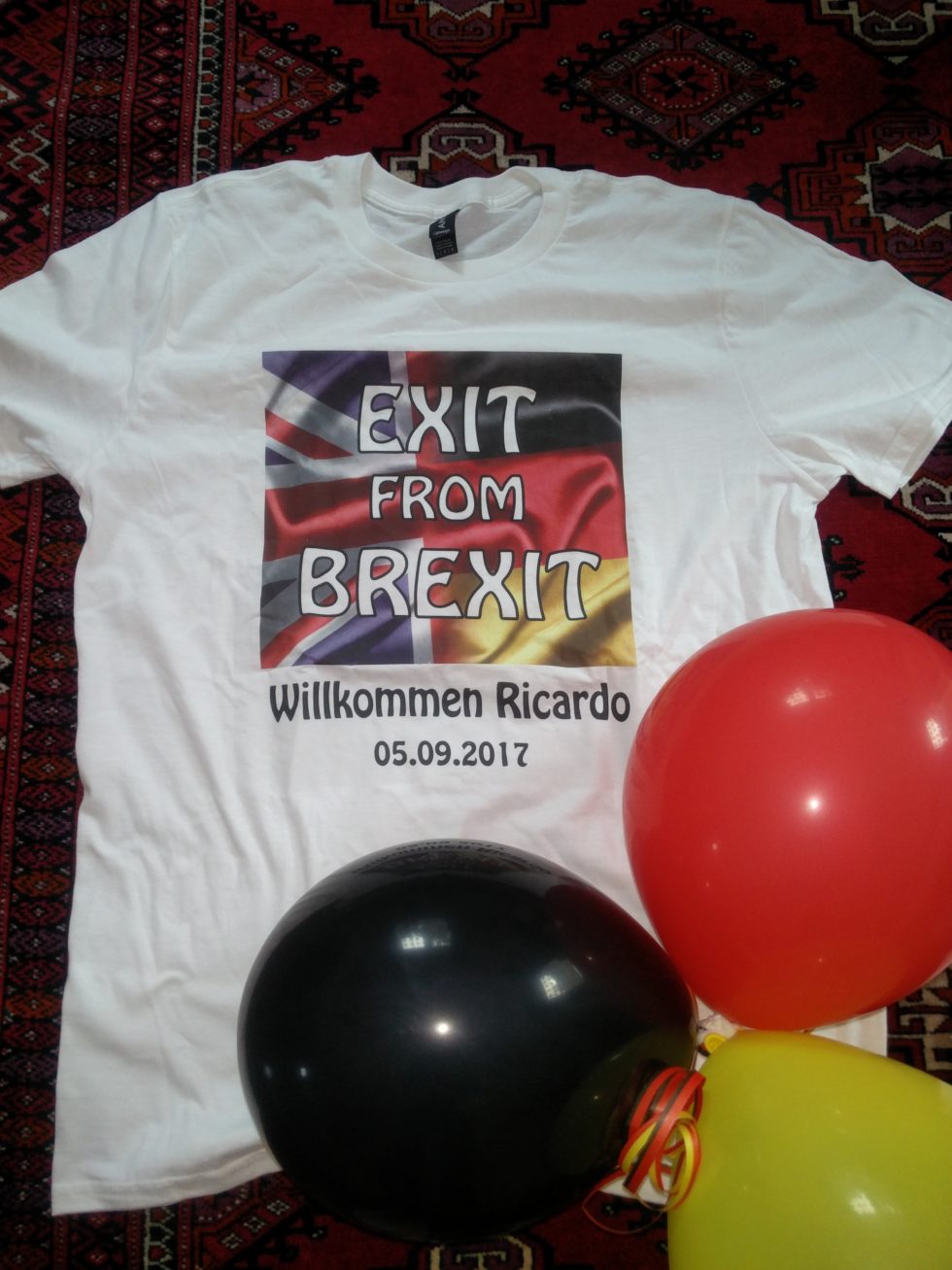 Yesterday, I was a Briton who was married to a German and living in the Hamburg area.

Yesterday, I felt AngloDeutsch: part British, part German (plus a few other bits thrown into the mix).

Today, I am truly AngloDeutsch.

I have been eligible for dual citizenship for many years. Initially, by virtue of having a German partner and latterly in my own right, for having lived in the country and paid taxes there for much longer than the qualifying period for citizenship.

Just like my partner, who had the right to British citizenship but never took it up, I never feel the need to become German.

Why would I; I have never felt like a second citizen here. Why would anyone choose to take-up a new nationality or give up one when there was absolutely no need for it under the European Union’s (EU) rules on freedom on people, goods, services and capital? I had exactly the same work, health, pension, tax etc. rights as any other German.

That is how many others in my position felt too, but the UK´s referendum in favour of Brexit changed everything.

My partner regrets not applying for British citizenship when the chance was there. I chose not to make the same mistake. As long as the UK remains part of the EU (currently until the end of March 2019), I was eligible to dual citizenship, so I decided to apply for it.

The decision to for dual citizenship was simple but not easy.

The choice was simple and in my shoes, you would probably have chosen the same. Like the British government policy stance, I went for the “have cake and eat it” strategy. The difference is that this is was a real option for me, whereas the British government continues to be deluded in thinking that it is be feasible to leave the EU and yet retain all the benefits of being a member of the EU, minus the “inconvenient” bits, such the EU membership fee and EU immigration (not to mention all the other things that the UK has opted out of in the past, such as Schengen, Euro, etc.). Today´s leaks once again show the British government´s inept stance on EU immigration.

The German application process was relatively simple. I had to fill in a 6-page residency form, which was detailed but not a monstrosity of 85 pages and 18 pages of guidance notes, as in the equivalent UK one. There was no unreasonable stuff, such as requiring a list all the international trips I made, as in the UK, or a sense of unreasonable potential obstacles being placed before me, such as proof of comprehensive sickness insurance for self-sufficient persons and students, as in the UK.

It was still a demanding form to complete and required various proofs, such as birth certificates and recent tax returns. Furthermore, it took a good six months to process which is a reflection of the demand for German citizenship, including a spike of Britons applying. The last estimate I read for the UK equivalent was several decades to process the current applications. The German procedure also included a thorough language test (whole day event), as well as a citizenship test (33 questions about national and regional history, culture, society, constitution, etc.), both of which are reasonable if you expect new citizens to integrate. Language is the basis for everything and a bit of knowledge of the country and its laws does no harm.

Those were the “easy”, procedural bits. The harder ones were about the implications for self-identity, as a result of choosing another nationality.

Naturally, this process would have been very different, if I had had to choose between British and Germany citizenship. To have given-up my British identity would have been a chastening exercise. There would have been a lot of emotional aspects connected with considering such a step, though I know Brits who have done so without apparent regrets. I have every reason to be happy and proud to be British, so I am not sure if I would have taken such a step.

I make no bones about the fact that I completely disagree with the way Britain has been changing prior to the EU referendum and rapidly post the Brexit decision. I fear for Britain, its economy and thus the future of my fellow Britons, my parents, brother and friends, both those that voted Leave and those that did not. I have friends and family on both sides of this yawning chasm which already defines Britain today and will continue to do so for at least a generation.

Brexit in itself would probably not have caused me to give up my British nationality. But I am fortunate; it was not a case of either one or the other since Germany allows dual citizenship for members of the EU.

I am fortunate to in this respect. German citizenship is an additive option, not a subtractive one. More is sometime more.

Some of the 1.2 million Britons living in other EU countries are not as lucky, even if they stay in those countries long enough to gain citizenship. Not many countries allow dual citizenship so the decision would be a lot tougher for them.

The Britons already living in an EU country that do not have the option of dual citizenship and choose not to give up their British citizenship will have their opportunities reduced to living and working in 2 countries instead of 28: the one they are living in and the UK. Less is most certainly significantly less in this case.

Everyone else, who is British and residing in Britain or a non-EU country, will have their options reduced from 28 to 1. Less is dramatically less for these Brits. The 52% of the voting electorate that voted Leave will get their just deserts. I feel deeply for all the others that voted Remain or did not or could not vote (myself included, due to the arbitrary 15-year rule).

Less is also a little bit less for EU citizens: their options will be reduced from 28 to 27 (except for the 3.5 million EU citizens living in the UK), though a lot is still to play for during the Brexit negotiations.

This massive asymmetry, involving Britons losing a hell of a lot more options than the EU citizens, has been largely kept from citizens by the politicians, both Labour and Conservative.

Almost criminally misleading claim have been made, such as that GBP 350 million per week will be spent on the NHS instead of the EU, that Britain can have its cake and eat it at the same time by leaving the EU and retaining all the benefits without EU migration and paying into the EU budget in the future, that there will be no “divorce bill”, that new trade deals will be easy for the UK to sign, that the EU has a lot more to lose than the UK from a lack of trade deal, that “Global Britain” can go it alone (surely an oxymoron) once unshackled from a sclerotic EU, that all the current social, health, safety, labour market, etc. rights will be retained by the British government post-Brexit, that net migration can be kept to under 100,000, that… well, you get the general idea. People can be and often are gullible, but not for ever and certainly not when reality starts to bite, which it is certainly doing, despite all the overtime being put into pouring oil on the stormy waters of Brexit by the Europhobic wing of the UK press.

After one year of the British government saying little more than “Brexit Means Brexit” and a lack of clear strategy for Brexit ( “constructive ambiguity” is the best that Mr David Davies can come up with as a fig leaf for the chaos and contradiction that he tries to pass-off as the “flexible and imaginative” British negotiating strategy). Britain clearly lacks the individuals (politicians and civil servants) and institutions with the skills and capacities to deliver a “frictionless Brexit”. Even if this were feasible, which everyone else but the UK government doubts, all the evidence so far is that negotiations with the EU are not going well for the UK and thus also for the EU. But the potential negative consequences for the UK are disproportionate compared with the likely effects on the EU-27.

The messy current and future reality of Brexit has become all too clear to British businesses and is rapidly becoming apparent to British citizens too. The politicians “in charge” (the hapless PM and her merry band of Brexiteers, Nigel Farage included) cannot postpone the inevitable.

The British economy has done extremely well in recent decades and this has been, to a significant extent, due to three critical champions that generate disproportionate wealth, employment, innovation and tax revenue such as the financial sector, the automotive industry and the university/research and development sector among others.  All three are currently in serious trouble. The first 12 months post-Brexit were a period of relative calm but since Article 50 was triggered by the UK, the implications rapidly began to dawn on the business managers in all three sectors, as well as most other parts of the economy.

There is trouble ahead, there are extra costs ahead, there are extra risks ahead, there is extra bureaucracy ahead, etc. The reduced or shelved investment plans are Britain´s loss. That applies to the investors that are already in Britain. New investors will not even seriously consider the UK in the future. The great majority of such investment will flow to the EU-27 countries instead, unless there is something very specific about the UK that will attracts such investment, despite the extra costs and bureaucracy outside the EU´s Customs Union.

I lived through the late 1970s and early 1980s in the UK. I am not nostalgic about high levels of unemployment and a palpable sense of decline at all levels of the economy and society. It was not a pretty sight then and it would be equally disastrous in the future. The difference is that while economic misfortune was mostly not self-imposed then (Thatcherism most certainly accelerated the process), it would be now.

My joy at becoming German is tempered by my concern, as a Briton, for the future of the UK.

There is nothing inevitable about the current Brexit trajectory and the negative consequences that have already started to flow from it.

The current Brexit path is the result of inept political leadership, Europhobic ideology and Tory in-fighting. No more, no less.

But there is still time to adjust the Brexit choices being made.