It seems as if a great number of people, and not just in the Eurozone and the European Union (EU); have taken to Twitter to express their view that Greece has been bullied and coerced into an unjust and undemocratic agreement by the other Eurozone members and by Germany in particular.

Prominent bloggers and commentators such as Paul Krugman, the Nobel-winning economist, have helped to legitimate and propel the hashtag #ThisIsACoup to the global audience. He wrote in his New York Times blog that:

“The trending hashtag #ThisIsACoup is exactly right. This goes beyond harsh into pure vindictiveness, complete destruction of national sovereignty, and no hope of relief.”

Partly as a result, the hashtag #ThisIsACoup, was trending in Greece, France, Germany, Britain and indeed globally as Twitters claimed that Greece was being stripped of its sovereignty as illustrated below. 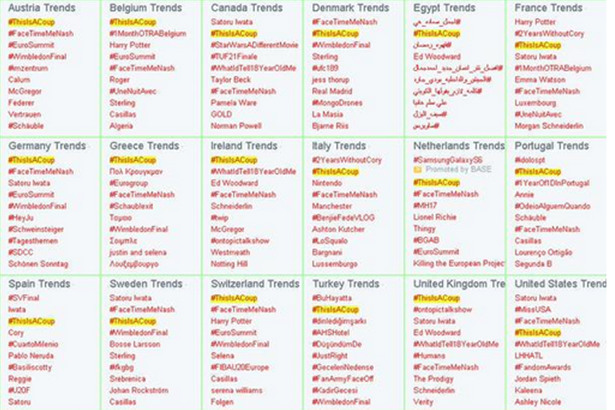 So it is worth examining what the hashtag #ThisIsACoup really means.

There are two meanings of the word “coup” according to Dictionary.com, with a third connected with the word:

Strictly speaking, it would appear as if the hashtag #ThisIsACoup is actually praising the bailout agreement that Greece and the Eurozone have come up with as “a highly successful, unexpected stroke, act, or move; a clever action or accomplishment.” However, if you read the thread, it is clear that the vast majority of people on have actually understood the Twitter hashtag #ThisIsACoup as the exact opposite. And took the opportunity to engage in a bit of Germany bashing while they were about it.

As an aside, what is not being reported is that there is also a hashtag #ThisIsNOTaCoup where quite a few people are arguing the opposite. Although I do agree with this particular hashtag, they are also missing the point.

This takes us to the third meaning, namely of a “coup d’état” which is, of course, what the hashtag #ThisIsACoup does not say but presumably actually meant to say.

So let us examine this option. The same source (Dictionary.com) defines a coup d’état as: “a sudden and decisive action in politics, especially one resulting in a change of government illegally or by force.” Furthermore, it identifies various synonyms for coup d’état, including “overthrow, rebellion, revolution, uprising.”

It seems as if the vast majority of people actually were talking about the hashtag #ThisIsACoupD’état rather than #ThisIsACoup. But let us examine if this makes any sense, despite its obvious popularity:

So please, you Twitters out there, do get your facts right instead of blindly following the herd instinct.

If you meant that “this is a coup”, then you have actually been lavishing praise on the Eurozone members and the agreement that was reached at the eleventh hour.

I think it is a flawed agreement but better than none.

And it you actually meant that “this is a coup d’état” (which is clearly not what the hashtag actually says), you have also  got it completely wrong.

Either way the hashtag #ThisIsACoup that has been globally trending is misleading to put it mildly.

Launch of the AngloDeutsch™ Blog

Today, the AngloDeutsch™ Blog was launched. The main reason is that Britain and Germany are countries that are absolutely critical to the future of Europe and the European Union. Yet, there is currently a gap in terms of comparing and contrasting the two countries in terms of various dimensions, such as economics, housing, health, etc. within the overarching context of the EU.

It was not always so. In the same year that Britain joined the European Economic Community in 1973, the Anglo German Foundation (AGF) was established in recognition of the fact that the Germany and Britain could learn a good deal from each other, not least to improve mutual knowledge between the two countries and deepen understanding of modern society and its problems. The AGF undertook policy-oriented comparative research on the Britain, Germany and what is now the European Union (EU). It was valuable to compare and contrast countries that were not only the two largest in the EU, which also exhibit rather different social, political and economic traditions. They are two of the largest EU trading and exporting nations, the people respect each other and, despite the differences, or perhaps because of them, they can learn from each other’s ways of doing things.

In 2009 the Trustees decided to abolish the AGF, the main argument being: “… other organisations at both national and European levels are now carrying this work forward, and the need for a specific institution for this purpose is no longer so compelling.” (Anglo-German Foundation for the Study of Industrial Society,p.3).

I disagree with this conclusion. Some 40 years on, the reality is that the need for comparative analysis and discussion in relation to Britain, Germany and EU is greater than ever before and it is far from obvious which other institutions are carrying this work forward. I believe that the last Trustees of the AGF would probably be astounded at how dramatically things have evolved since their decision to end the institution.

A number of momentous developments are affecting the socio-economic dynamic in Europe:

These stresses and strains are part and parcel of what has become a full-blown crisis of the legitimacy of the “European Project”, as understood since it was formed in 1951 by the Treaty of Rome. A process whose ambition was to “make war not only unthinkable but materially impossible”  (The Shuman Declaration, 9 May 1950) was not and could never have anything short of an economic, social and political project, even if the discourse was principally economic.

This ambition was not merely a Franco-German idea. Immediately after WWII Sir Winston Churchill was one of the first to call for a “United States of Europe” (“We must build a kind of United States of Europe. In this way only will hundreds of millions of toilers be able to regain the simple joys and hopes which make life worth living. ” 1946, p.1). The ambitions of the European Project have always been understood in its wider sense by its founder members, not least Germany, because of its particular historical specificities.  However, this ambition was and remains almost entirely an economic or trade issue in pragmatic Britain.

Longstanding concerns about the legitimacy of the EU, the steady erosion of the powers of the nation state (contrary to the principle of „subsidiarity“), the implications of principle of freedom of movement and indeed of the limits to the notion of „ever closer union“ in the EU have been forced to the foreground by the Euro crisis. These issues must be debated and tackled to maintain legitimacy with the people as well as the governments of all 28 EU nation states.

Britain and Germany at the leading edge of the EU

In this context, the British and German electorates have a critical role to play in the future of their respective countries, as well as that of the “European project”. They are at the nexus of the most important debates connected with the great issues confronting Europe, not least:

Through the AngloDeutsch™ Blog, launched today, focuses mainly but not exclusively on Britain, Germany and the EU, it is hoped that a contribution can be made not only to better understanding in general but also to possible economic and social policy solutions and recommendations. This would be in keeping with the tradition of the now defunct AGF, even if the focus of a blog cannot be on rigorous academic research per se.

Focusing on the British and German perspectives has gained in salience. The target group of this blog is not the academic community, interest groups or indeed the politicians, though it is hoped that they too will get involved and/or be influenced by the AngloDeutsch™ Blog. The target group is anyone who has enough humility to be willing to learn about alternative ways of doing things, discuss different views and maybe implement some of the ideas, taking into consideration the uniqueness and specificity of every nation, region and locality. This aim is illustrated in the Box below.

To kick off the blog, the first few themes covered by the AngloDeutsch™ Blog will include the following: