Immigration Perceptions: out of kilter

In the next post, I shall look at the evidence of immigration, with a particular focus on EU migration.  From a casual reading of the media reporting, one could be forgiven for concluding that immigration is increasingly seen as being “the” problem Britain, but lesser so in Germany. The aim of this post is to examine public perceptions in Britain, Germany and Europe more generally about migration, since this is the driver of opinions, voting patterns and ultimately immigration policies. To do this, I use the “Transatlantic Trends” (2014) report from the German Marshall Fund which has been exploring this issue since 2002, as well as the results of the IPSOS MORI “Perils of Perception Global Survey” (2014).

Most Europeans (58%), including Germans (66%) and Britons (58%), say that they have at least a few friends who were born in other countries. Nevertheless, a significant majority did not approve of their own government’s handling of immigration: this applied to 60% of Europeans, with disapproval most pronounced in Spain (77%), Greece (75%), United Kingdom (73%), Italy and France (both 64%). The level of disapproval of their own government’s handling of immigration was much lower in Germany (51%), Portugal (48%) and Sweden (38%), which incidentally also exhibit notable levels of immigration.

Europeans think that the most common reason for immigrants to come to their country are “to work” (61%), but the second most cited reason was “to seek social benefits” (41% – note that the figures do not add to 100% since respondents were asked for two main reasons). This was particularly pronounced in the Netherlands (56%), France (54%) and UK (55%). “To seek asylum” was the third most frequent motivation attributed to immigrants in Europe (40%), especially in the case of Sweden (68%), Germany and the Netherlands (both 47%), and Italy (46%).

In terms of asylum seekers / refugees, whereas 34% of Europeans said policies were “about right now”, 40% said their country’s policy should be more restrictive, including Italy (57%), Greece (56%) and the UK (48%). However, some were actually willing to have less restrictive refugee policies, especially Germany (31%), the Netherlands (26%), Poland and Spain (both 24%).

55% of European were not worried about immigration from within the EU but 43% were. The Swedes (82%), Poles (72%) and Germans (65%) were most likely to say they were not concerned by immigration within the EU; the Portuguese (62%), Spaniards (53%) Italians and Brits (both 51%) were the least likely to agree with this view.

Estimates of Immigrants as % of the population

When an IPSOS survey asked the question “Out of every 100 people, about how many do you think are immigrants?” and the same again for “Muslim” the results are remarkable, as illustrated in Table 1.

Table 1: Perceptions and reality in relation to Immigrants and Muslims

Table 1 shows a number of features of perception vs reality in relation to migration:

But the IPSOS MORI survey is not only interesting for the above results. It also asked the respondents for the cause of their overestimate of actual immigration. The results are highlighted below.

The main justifications for the overestimate of the percentage of immigrants were:

We now turn to the Transatlantic Trends (2014) report, which demonstrates in an experiment carried out in 2010 and repeated in 2014, that provision of information does affect public perceptions about the number of immigrants. Half of each national sample received the official estimates of immigrants as a percentage of a country’s population. The other half did not. The two groups were then asked whether there were too many immigrants in their country. The results of the two halves of the sample are illustrated in the graph below.

Graph 1: Too Many Immigrants in Our Country? 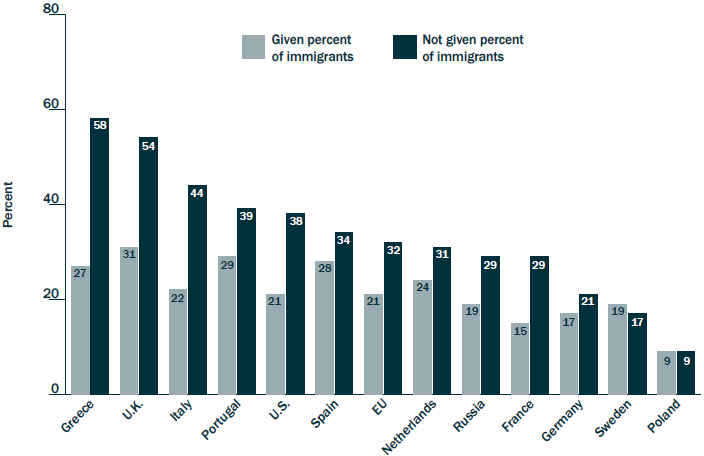 Source: Chart 17: Too Many Immigrants in Our Country (Transatlantic Trends, 2014)

The half that received the official estimate before answering the question were less likely to say there were “too many” immigrants in their country, especially in Greece, United Kingdom and Italy. 58% of Greek respondents without official information said there were too many immigrants, but only 27% of those with official information said the same. In the UK the same drop was evident from 54% to 31% (in Italy from 44% to 22%; in Germany from 21% to 17%).

The above discussion has highlighted the importance of public perceptions of immigration, with a focus on Europe, Germany, Britain and a few other countries. Despite the similarities in the immigration issues faced by them, overall, people are very poorly informed of the actual levels of immigration. Their estimates of immigration are badly out of kilter compared with the reality, but they are particularly so when it comes to estimates of Muslims in their countries.

There is clearly a need for awareness raising and public education about both issues. It would appear that many people do not believe the official figures when shown them after their estimates are given, stressing that the official figures do not pick-up illegal immigration and sticking to their guns in terms of their own estimates or experiences. A slightly different approach, namely giving half the respondents the official immigration figure and the other half no official information, reveals that those that receive the official estimate were much less likely to say that there were “too many” immigrants in their country. It is hard to avoid the conclusion that provision of information does change perceptions about immigrants.

But this appears to have cut little or no ice with much of the media and the politicians. Both appear, with some notable exceptions, to be hell bent on pandering to populist perceptions. Yet those very perceptions are significantly influenced by whether they are aware of the real level of immigration or not. If they are, the perception of immigration as a problem declines significantly. These two issues reinforce the critical importance of awareness raising and courage on the part of the media and politicians to counteract widely-held but inaccurate perceptions. Such perceptions are contributing directly to an apparently inexorable increase in anti-immigration (and anti-EU) feeling in Europe. It is high time for both of them to perform their duty towards the general public more responsibility.

Will it happen, for example, in the lead-up to the British General Election? I am doubtful. To be fair, a scan of the media since the recent bye-elections won by UK Independence Party (Ukip) suggests a slightly more balanced approach to the prevailing anti-immigration sentiment, if not the continuing EU/Euro scepticism common in the bulk of British media reporting. The former is at least cause for cautious optimism.

With Christmas and the New Year approaching, I would like to take the opportunity to wish my readers a peaceful Festive Season ahead.